Design of the navigation channel on the Senegal River

The project, which was commissioned by the Organisaton pour la Mise en Valeur du Fleuve Senegal (OMVS), aims to resume navigation on the Senegal River over a length of 905 km between the city of Saint-Louis (Senegal) on the Atlantic Ocean and the city of Ambidedi in Mali. The consortium, led by IMDC, is responsible for the study of the detailed preliminary design and the preparation of the tender documents of the works.

The project consisted in reviewing a feasibility and preliminary design study carried out in 2004 and refining it to the level of detailed design. The consortium also drafted the tendering documents for project execution using World Bank procedures and templates. The study also required extensive additional site investigations: bathymetrical surveys over the entire length of the channel, topographical, geotechnical and/or geophysical surveys at port locations and underwater inspections of existing strucures to be reused. Studies related to the port of Saint-Louis and the maritime access channel through the Langue de Barbarie were carried out by another consortium.

The projected channel will be 35 m wide with a minimum depth of 2.10 m guaranteed all year round, thanks in part to the existing regulating infrastructure on the Senegal River, namely the Manantali dam (upstream) and the Diama dam (downstream). The project also includes the construction of a fluvio-maritime port in Saint-Louis, eight fluvial ports in Senegal and Mauritania and a terminal port in Mali.

The design ship of the project is 80 m long, 11 m wide and maximum 1.50 m draught in low flow conditions. Larger draughts are achievable on shorter periods of the year and/or on downstream portions of the river.

The technical specifications of the channel are largely inspired from French regulations and is laid out in order to allow smooth navigation and minimize volumes to be dredged.

A total of approximately 970 000 m³ of sand, spread over 60 shallow areas, is to be excavated and disposed of in 28 pre-identified disposal areas situated on both banks of the river. Around 25 000 m³ of rocks are also to be excavated, mainly in the more upstream part of the channel.

Dredged volumes are derived from a 1D hydraulic model. In some critical locations, 2D models have been setup in order to assess current velocities and direction and their impact on navigation conditions. The interest of river training structures which have been proposed in past studies has also been studied. However, none of the proposed structures were retained.

The fluvial ports include multilevel loading platforms (enabling manual loading/offloading of ships regardless of the water level), a port area with warehouses, an administrative building, networks (electrical, lighting, drainage), fencing and an access road. The terminal port of Ambidedi also hosts a container storage area, an oil storage area and a railway connection.

The study included the design of a 24h/24 aids to navigation system. A buoyage/beaconing plan including around 910 buoys and 120 shore beacons and based on the European CEVNI code has been prepared. The consortium has also designed a fluvial VHF system, based on approximately 25 relay stations interconnected through a telecom backbone and three command centers. The system is designed to facilitate future potential addition of AIS transponders and the implementation of a River Information Service (RIS).

Finally, social and environnemental impacts of the proposed works were studies and recommendations for their mitigation were proposed.

The consortium for this project was composed of IMDC, Tractebel, IDEV-ic of Senegal and BET-GP of Mauritania.

Main locations of interest of the project 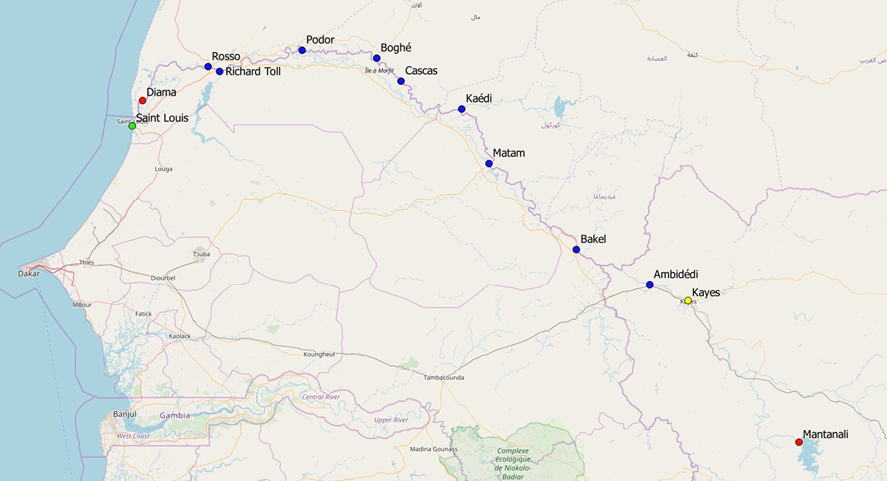