Ecosystem services assessment of nature-based solutions at the Belgian coast

IMDC studied the ecosystem services impact by six different nature-based measures relevant to ensure coastal defence at a sandy coast and additionally create a multitude of ecosystem services. This research aimed to promote "building with nature" in the land-sea interaction zone to the policy makers of the coastal municipalities, as well as to clarify to them the broad added value of these solutions.

IMDC investigated which nature-based measures are useful along the Belgian coast to ensure coastal defense and additionally create a multitude of ecosystem services. The project consisted of three parts. First, a long list of sites along the Belgian coast with potential for nature-based measures was identified through hotspot mapping and an initial screening of ecosystem services was made for a set of nature-based measures at each of the long list sites. Six nature-based coastal protection measures were selected for further analysis: biogenic reef in the foreshore area, different nourishment measures (foreshore, beach), different dune measures (dune nourishment, dune-in-front-of-dike), and a hybrid dike-in-dune/green dike measure. Next, the Coastal Safety Tool, developed by IMDC, was used to develop scenarios with all the same safety level for conditions with sea level rise +1.5m. For each scenario, the impact on a variety of ecosystem services was quantified together with the University of Antwerp. The analysis shows the added value of NBS compared to hard measures. It also shows the differences between sandy NbS (nourishments) with limited ES and NbS with plants and animal species (dune vegetation, reef species) with a higher multitude of ES. The detailed ecosystem services analysis of the six scenario’s was discussed with and reviewed by experts. In the last phase of the project, the results were presented to local governments to learn their reactions. This research aimed to promote "building with nature" in the land-sea interaction zone to the policy makers of the coastal municipalities, as well as to clarify to them the broad added value of these solutions. 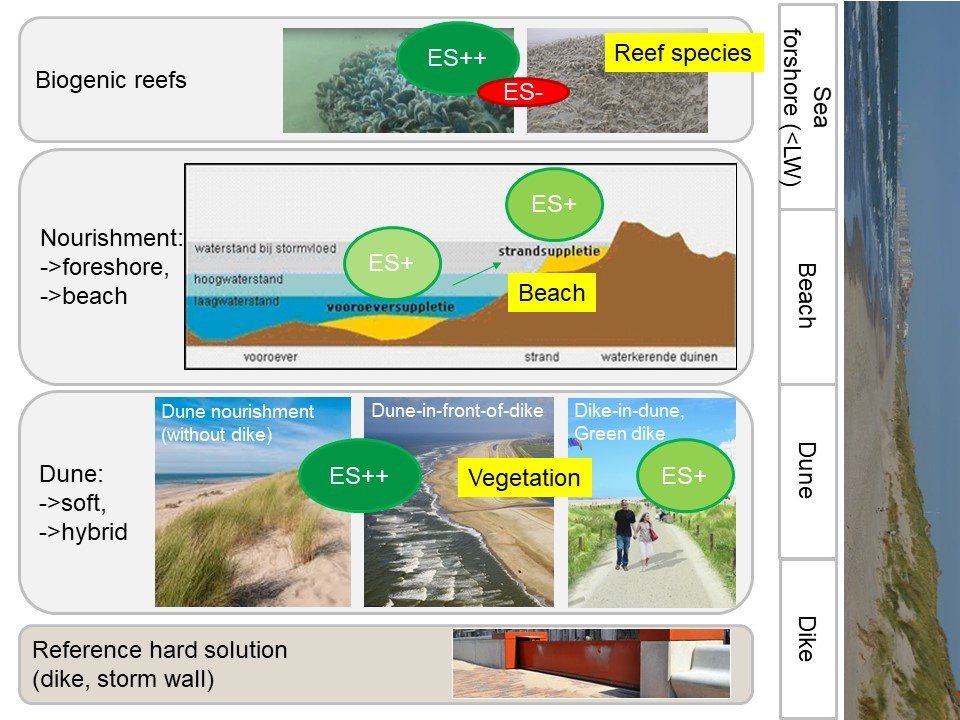