The Third Set of Panama Locks Project, comprises of the construction of a new shipping lane with locks on both sides of the Gatún Lake, at the isthmus of Panama. Ships approaching the locks navigate at a very low speed and are therefore susceptible to currents that affect the heading of the vessel (exchange currents). 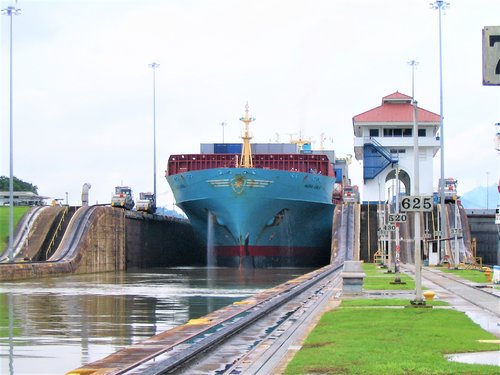 The goal of the project was to study the discharge and density currents that affect the maneuvering vessels during present (Miraflores) and future (Third Set) lock operations at the Pacific side of the Panama Canal and to recommend alternatives that mitigate or eliminate the adverse effect of density currents on navigation and throughput.

A measurement campaign and 3D modelling study were performed for ACP (Autoridad de Canal de Panama). Various 3-dimensional numerical models have been set-up that represent the density currents at the present locks. The 3‑dimensional hydrodynamical software Delft3D-Flow was applied to compute the longitudinal and lateral (cross) currents. The models of the present locks (Miraflores) were calibrated and validated for the Miraflores locks in the present conditions using the results of the in-situ measurement campaign. Sensitivity tests with the calibrated near-field model of the present condition have been performed, to study how a variation of the driving forces would affect the density currents.

After the numerical models for the present locks were successfully calibrated and validated, the future situation models were set-up to study various design and functional parameters. The model has proven to be an effective design tool to evaluate the (density-driven) currents after changes to the design (tail bay, culvert location, navigation channel, center wall) or the forcing (lock operation, tidal conditions, salinity, river discharge, etc.) of the future Third Lane Locks. Results of the model can be used to assess forces on the vessel while in the tail bay and the current fields can be imported in the ACP's Navigation Simulator.