Over the past years IMDC developed the flood forecasting system ‘FEWS Flanders’ for the navigable rivers in Flanders to replace the existing ‘Floodwatch’ system. The new system is set up by making use of the open source platform 'Delft-FEWS' (Deltares). Delft-FEWS is a highly generic and configurable platform for handling and visualizing data-flows, steering model runs and sending out early warnings in case of upcoming flood events.

In close cooperation with Flanders Hydraulics Research, IMDC configured the whole system and developed the user interface in several steps. In 2013 a first pilot study was set up for the river Dender. Between 2015 and 2016 all Flemish catchments were included to run operational in a client-server environment at Flanders Hydraulics Research. Between 2016 and 2017 most models, workflows and data-flows were optimized. During a span of several months the system was running in parallel with the previous system. By the end of 2018, after a sufficiently long comparison period, ‘FEWS Flanders’ was put into production and linked to waterinfo.be, the public hydro-meteorological data exchange and forecasting platform of the Flemish Government.

In general, the system retrieves data, several times a day, from different weather models (ALARO-KMI, ECMWF, ICON EU) with lead times up to 10 days ahead. These weather models serve as input for hydrological models (NAM) that provide input to hydrodynamic models (Mike11). The figures below give an overview of the ongoing workflows and the modeltrain in the system. Every 6 hour the system provides a new forecast which is sent to waterinfo.be. Based upon the forecasted model results forecasted flood maps and freeboards of dikes are created and pushed and made available to the public through waterinfo.be. ‘FEWS Flanders’ also collects measured data from monitoring stations, which allows data assimilation in model runs and quality improvement and accuracy checks on the forecasts.

More info on the ‘FEWS Flanders’ system can be found in the following publication: 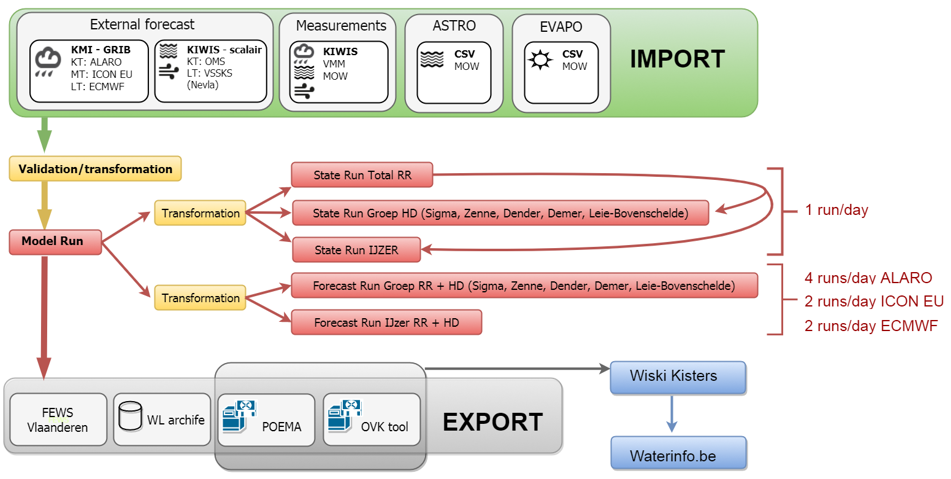 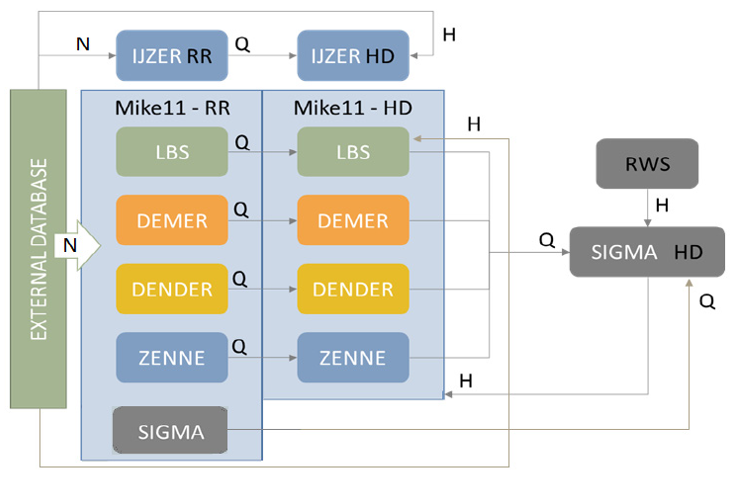 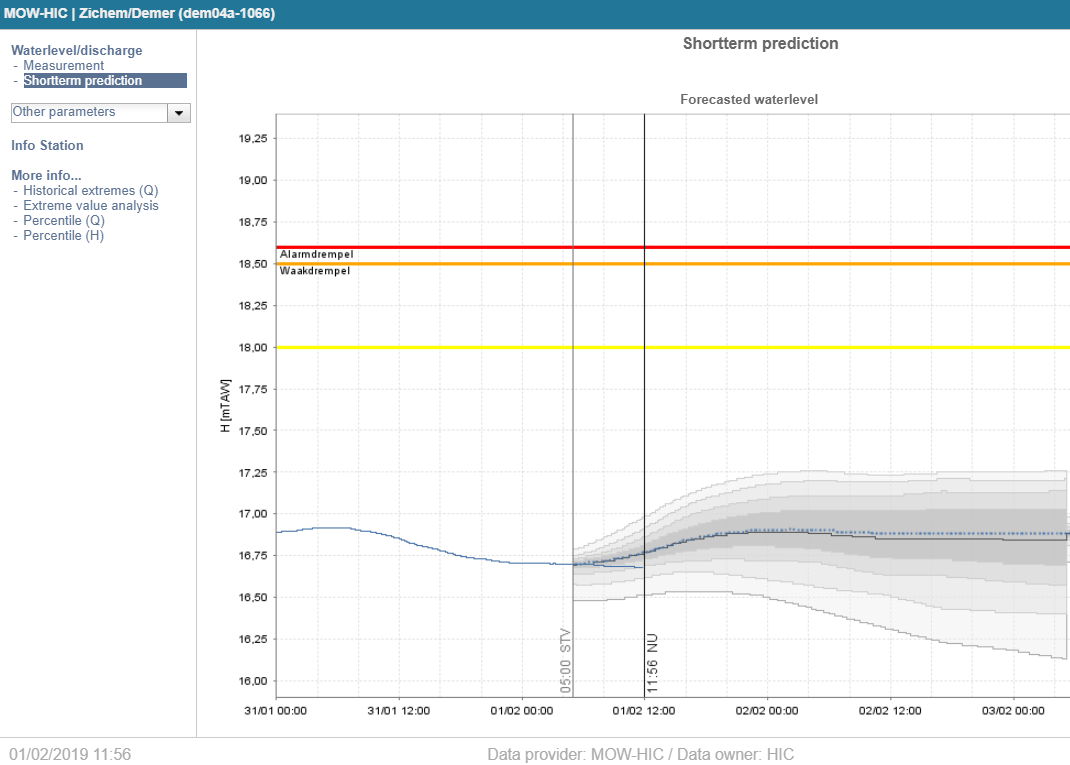 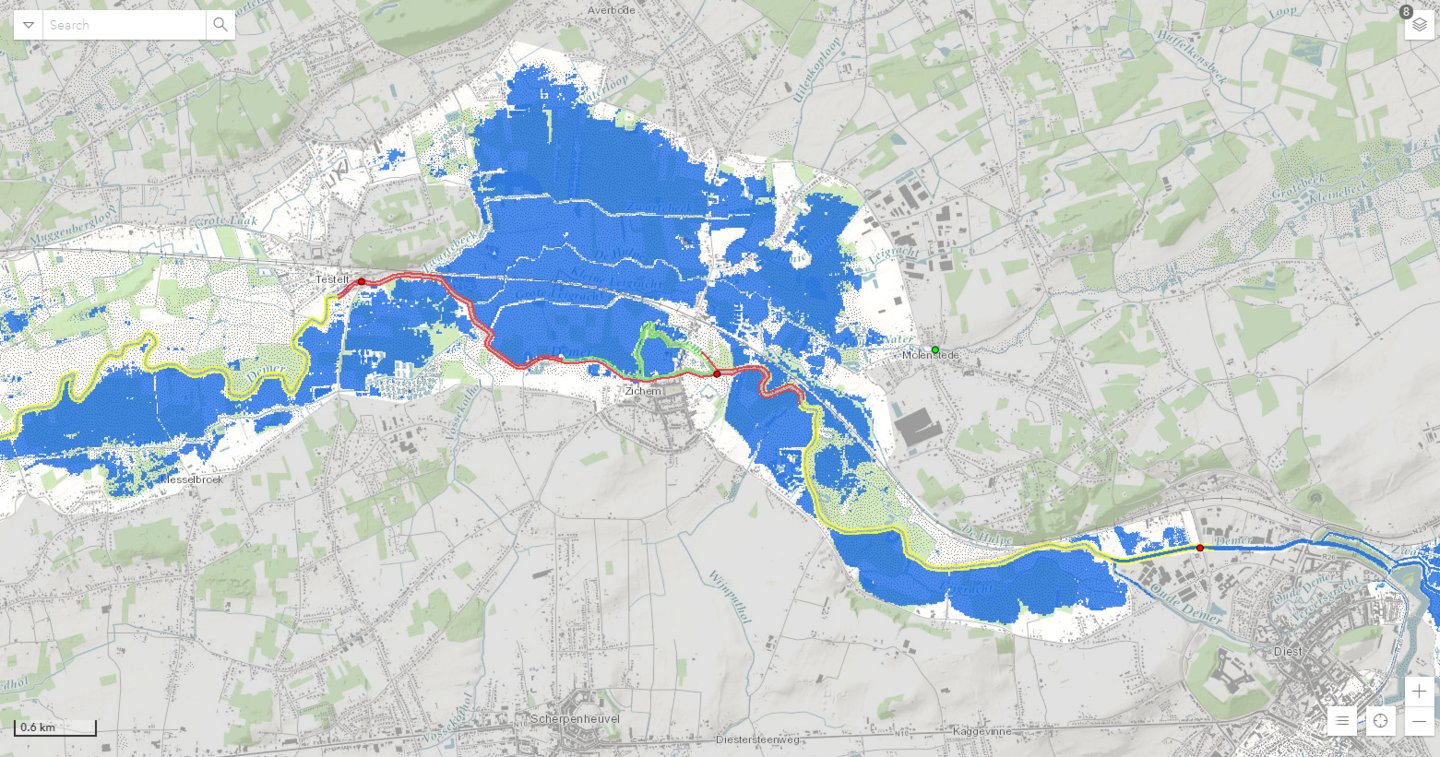